If you pay income tax in the Republic of Ireland, and donate more than €250 in a tax year, your church could claim tax relief on your donation and boost the value of your gift without it costing you a cent.

If you are a tax payer the tax refund for donations will be set at a blended rate of 31% regardless of the rate of tax which you pay.

These extra funds, at no cost to you, can make a very significant difference to the funds we raise. For example donations of €250 over the period of a year is worth an extra €112.32 to the church.

The Gift Aid scheme is for gifts of money by individuals who pay UK tax.

Gift Aid donations are regarded as having basic rate tax deducted by the donor. Charities or CASCs take your donation – which is money you’ve already paid tax on – and reclaim the basic rate tax from HM Revenue & Customs (HMRC) on its ‘gross’ equivalent – the amount before basic rate tax was deducted.

Basic rate tax is 20%, so this means that if you give £10 using Gift Aid, it’s worth £12.50 to the charity. For donations between 6 April 2008 and 5th April 2011 the charity will also get a separate government supplement of three pence on every pound you give.

Collections for the benefit of the church

If the church is recognised as a charity by HMRC, Gift Aid can be claimed on money collected for the benefit of the church. In order to make a repayment claim your church must obtain a Gift Aid declaration from the donor.

When the envelope is opened and the contents are counted, an official from your church should record the amount on the envelope it came in, and in a donor record. You should keep the envelopes as part of your normal record keeping.

Church collections passed on to a charity 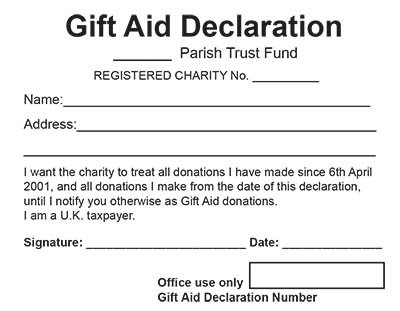 If a church collection is collected on behalf of another charity and simply passed directly on to that charity then the money collected does not form part of the church’s income, as it is merely acting as a go-between for the donor and the charity. The charity (and not the church) should therefore claim any Gift Aid – providing the usual Gift Aid rules are met.

Church collections given to a church fund for a charity

If a church chooses to set up a fund to raise money for a charity, then the money collected forms part of the church’s income and the church (which is a charity in its own right) must claim any Gift Aid due.